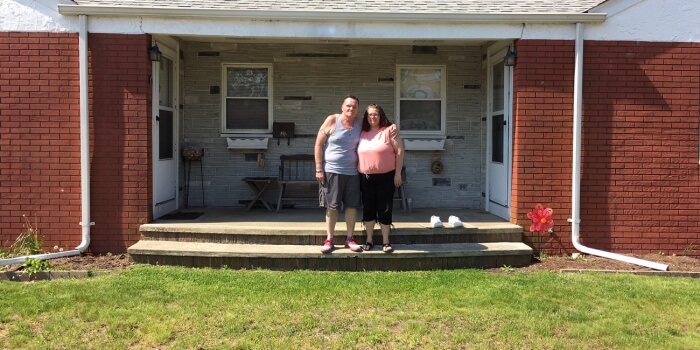 “Westbay gave us the opportunity to regain our lives back.” June 2, 2016

It was the year 2009/2010, and we were drowning financially! The stress on our marriage was immense. My husband started using, and ended up doing 9 months in jail! While he was there I was unable to keep it together financially, so I became homeless. Once that happened, I too began using and ended up in jail. I was released to a sober house and my husband was released to a long term treatment center. Once he completed treatment, we found ourselves homeless because neither one of us had an income to pay to live anywhere. We bounced around from shelter to shelter, friend’s couches, and staying outside! It is almost impossible to stay clean and sober while being homeless. You are surrounded by addicts everywhere you turn. But we stayed sober enough to keep looking for help. We tried a local recovery facility and we had a great feeling that they would help us, but my husband was mugged and left out in the freezing cold which almost took his life! At that time this same facility had given up on us! Afterwards, we decided to go to a homeless outreach program as soon as we heard of them. We had a great case worker there and she would do whatever she could to help us. She helped us put our names on several housing lists, but with no income we felt we had no shot! Then finally November 2014, my husband finally began receiving his Social Security Income. In May 2015, our case worker contacted us and said that she received a call from Westbay looking for a match for one of their housing units. Our case worker thought of us immediately! Within three weeks the lease was signed and we were moving in! We did not start with much at all, but we loved this apartment so much that we just kept working hard, saved every extra penny we could to start getting things we needed and wanted. We feel that Westbay gave us the opportunity to regain our lives back. And to make our lives better than it ever was! We need to rid this country of homelessness! When you are homeless, you feel helpless, and treated less than a regular person! You gave us the foundation to start a new life, and that is exactly what we have done! We have lived here for a year now and have been in recovery since we have lived here! Our life is still a work in progress, but that is what makes it so exciting, we are always working towards making more of our dreams
come true.